In September, 2013 I was lucky enough to attend the Philly Non Sports Card Show. Aside from meeting some fantastic artists and collectors, I was able to take part in a special project 30 years in the making: the Garbage Pail Kids Documentary!


Our goal is to celebrate the 30th anniversary of Topps’ Garbage Pail Kids Cards with an awesome documentary that is jam-packed with interviews and stories from the original creators of the controversial and explosively-popular 80’s card series. Grown-up kids will share nostalgic memories of what it was like to be a part of an international phenomena. Superfans will give us a peek at what a 30-year amassment of Garbage Pail Kids memorabilia looks like. We will explore the rich cartoon art history that bred this culture icon and proclaim Garbage Pail Kids as a solid mark of the 20th Century!

HOW YOU CAN HELP

Because this is an INDIEGOGO project...its success depends 100% on you guys stepping up to the plate! This is NOT an official Topps release - this is put together by fans and collectors just like you...so we desperately need your help!!

And if this wasn't sweeeet enough, you actually GET stuff in exchange for donating. The INDIEGOGO page details out the insane amount of items that are available for donating to the project. 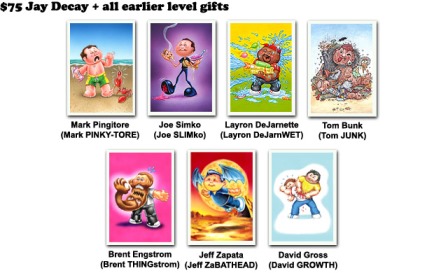 You obviously love Garbage Pail Kids (you're here aren't you!?), and if they hold a special place in your heart like they do me, donating should be a no-brainer! So without further ado...click HERE to head over to INDIEGOGO and throw some money at this unbelievably-fantastic project!! 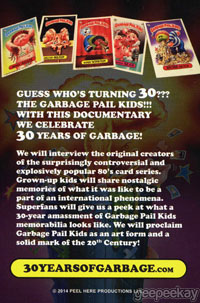 Obviously this page will continue to grow as the documentary gets closer to completion. The guys in charge are planning on a 2016 release...so STAY TUNED!!

THANK YOU JOE & JEFF! (and all the other supporters of this wonderful project!)