Garbage Pail Kids are often gross (and occasionally spooky) so it only makes sense to turn some of them into HALLOWEEN COSTUMES. However, over the past 30 years only two companies have produced such a product: Collegeville and Trick Or Treat Studios. This section provides pictures and information on the variety of costumes available to collect. 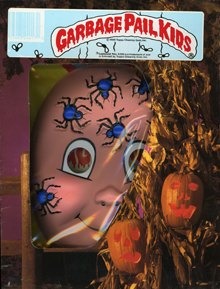 Anyone who bought a costume in the mid-80's will no doubt recognize the packaging, as it was fairly standard for kid's costumes at the time. The packaging cosisted of a cardboard box with a see-thru window on the top. The costume details were included on a label located on the end of the box that would enable store-workers to stock the costumes on top of each other. Other than the label, the box was standard for every costume released by Collegeville.

Inside the box, the costume consisted of two pieces: a mask, and a 'shirt'. The mask was made of a thin plastic and secured around a child's head with a thin elastic band. The cape was made of a slick vinyl material that extended past the child's waist. While the mask was made to look like a Garbage Pail Kid character, the shirt was simply the image from the sticker. By current standards, this costume is extremely simple and ineffective; however, as mentioned above, this was an extremely popular costume style in the 80's (and I remember how hard it was to get your hands on these!!) 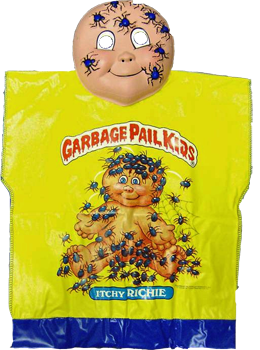 In early 2015 a few images were spotted online of an Ali Gator mask. As speculation started to grow it was revealed that Topps was working with Trick Or Treat Studios on a set of Halloween Masks to celebrate the 30th Anniversary of Garbage Pail Kids. Reaction to the masks was mixed as not only were the characters choices odd, but also lacked a real likeness to the sticker images. 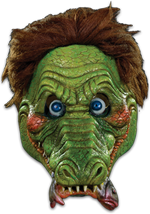 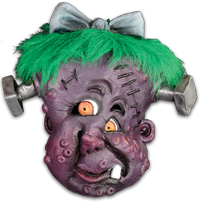 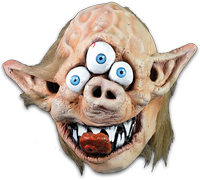 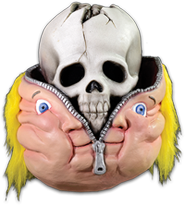 *Trick Or Treat also produced a 'prop' that is often confused as a fifth mask. In fact, Glowing Amber (while made of the same material) is intended to sit on a table top and can not be worn on a head. 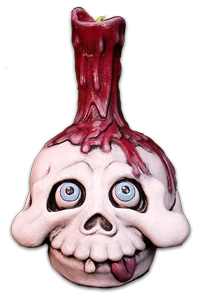