Poop, puke, snot...sounds like the perfect setting for Family Game Night! And luckily, there are a few GPK GAMES out there to play on just such an occasion. From board games, to dice games, and even an online game...there's something for everyone!

Released in France in 1989 as part of their Les Crados foreign release, the Beurk boardgame echoed the look and feel of many popular board games at the time. 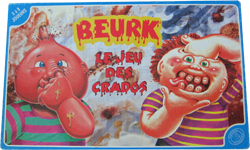 Board Game Box (back)

Admittedly I am not entirely sure what the object of the game is...nor am I clear on how the gameplay works. So...to that end...if you speak French and have some information about this game please hit me up and I will gladly update this section with some actual information that is helpful! 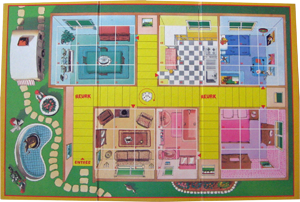 Steve Jackson Games is a game company, founded in 1980 by Steve Jackson, that creates and publishes role-playing, board, and card games, and the gaming magazine Pyramid. In 2014, SJG noticed that there weren't any Garbage Pail Kids themed games on the market and decided to remedy that by planning TWO GPK games for fans and collectors! Their first game Super Snot Shots was a surprise-release at the NYCC in October, 2014, however their second game Disgusting Dice...although planned and advertised to be part of Topps 30 Year Anniversary...was never released. 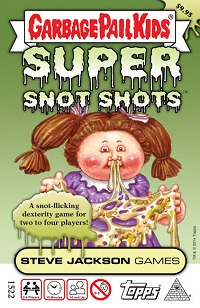 Fling your snot (dice!) at the Garbage Pail Kids! The more of them you hit with your boogers, the more points you score. But watch out! The other players are also Super Snot Shots and only the grossest player will win the game.

The game comes with 15 cards, four six-sided dice, and a rulesheet...all packed up nicely in a ziplock bag. It's for anywhere from 2-4 players, and the best part is that it can be played in 10 minutes or less! Here's a quick video that Steve Jackson Games put together illustrating both the game setup and gameplay: 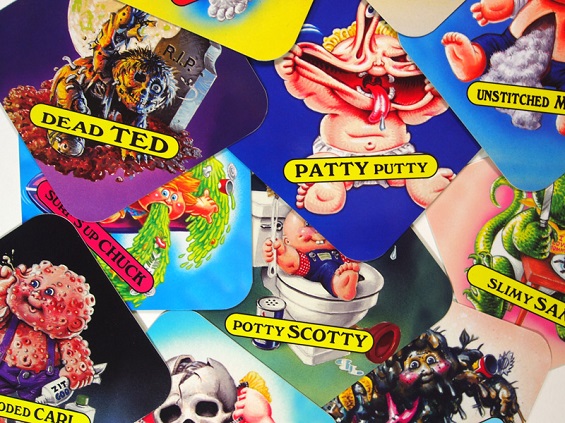 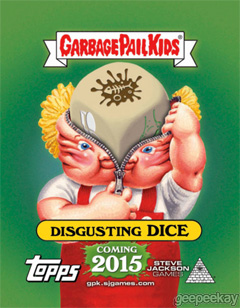 As mentioned abvoe, SJG planned and announced a SECOND game...however at the end of 2015 there was still no word WHEN it would be released. I reached out to the company only to be told that a release of the game was no longer planned. Even though the reaction to Super Snot Shots was mixed, it was still fun to have some random GPK merchandise on the market...so with that attitude in mind, here's hoping Disgusting Dice eventually sees the light of day!

If good ol' fashioned board games aren't to your liking...and you would rather click away at an online-version of Garbage Pail Kids Memory...then today is your lucky day! Click the link below to play!