Below is a scan of the Pencil Billboards section from the 1986 Imperial Toy Catalog which includes detailed product information and item descriptions. It is interesting to note that the product catalog image does NOT INCLUDE the Garbage Pail Kids banner on the billboards!? 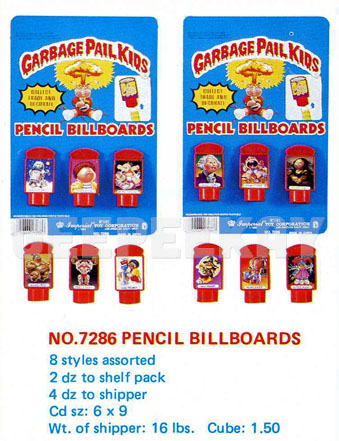 Pencil Billboards were created by Imperial Toys in 1986 as part of their large Garbage Pail Kids-related toy line. There are 24 different characters on the Billboards. Couple the number of characters with the 3 different colors of plastic, and a 'complete set' would be nearly impossible to assemble. 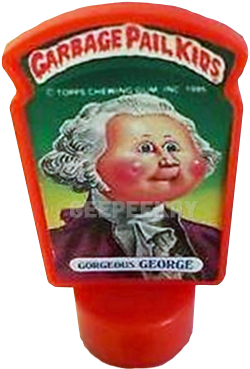 Pencil Billboards were available to consumers in two different ways, blister packs and a plastic trashcan display. The cardboard-backed blister packs came with three different Pencil Billboards and were intended to be hung on a peg display. The back of the package was just blank cardboard, but there was a 'helpful diagram' showing how to put the billboard on top of a pencil ;) 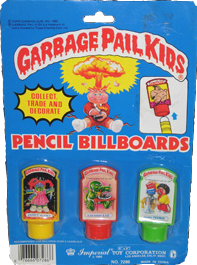 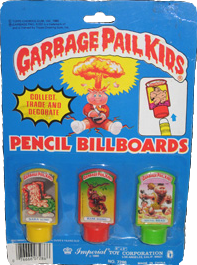 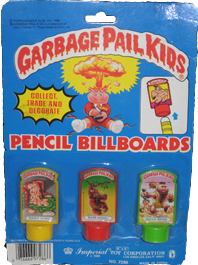 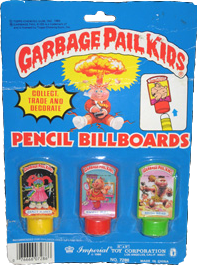 Below is a scan of the Pencil Billboards 'Trashcan' display section from the 1986 Imperial Toy Catalog which includes detailed product information and item descriptions: 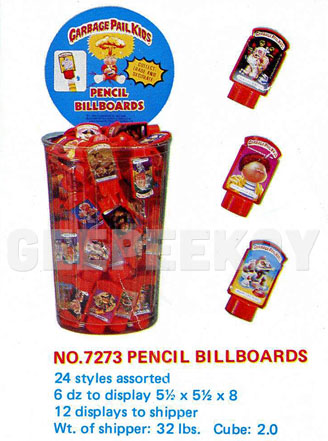 The trashcan is rather simple in design, made of clear plastic with a cardboard insert/lid. When closed, the lid reads 'Pencil Billboards' and contains information about how to collect and use the product. When open, the same information is displayed, however this time in French. Also, the cardboard has artwork on it that makes it look like the inside of a trashcan. The billboards themselves are just thrown in randomly into the can. These Pencil Billboards Trash Cans are EXTREMELY rare and never show up for sale. 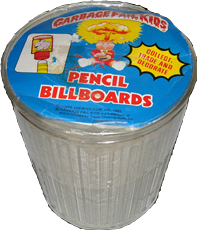 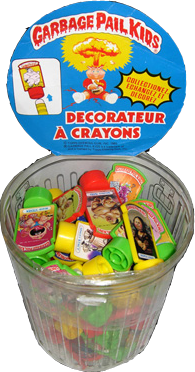 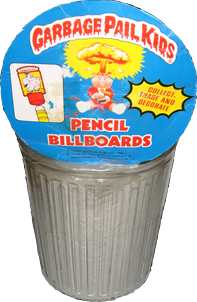